I feel kind of anonymous on this blog. This isn’t a personal blog, so that’s okay. But I’m going to do a personal post anyway.

I’m from Colorado. It’s not that cold. It does not snow as much as people think it does. It is really windy. Like Chicago-style Sunday. Without the deep-dish crust and 600 calories of cheese.

I graduated from high school in 2008 and moved to San Diego for college. No I’m not tan. I will never be tan. I will die of skin cancer before I tan. And I’m not a fan of dying. I have an extensive bucket list to take care of first.

I have a horse. His name is Escobar. I did not name him- really, how cool do you think I am? Here’s his picture: 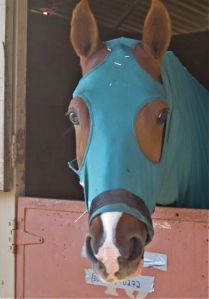 Cute, huh? He’s a Hannoverian. Which is just a big German breed of horse. He does not jump. He is, in fact, terrified of jumps. He is terrified of most things, actually. We do dressage. Here’s another picture of me riding him in a show:

I live with my roommate and her cat and her rabbit. The cat pulls her hair out. Yeah, we don’t know either. Neurotic, I guess. The rabbit is pretty bitchin’ though. Like if there was a constant between the cat and the horse and the rabbit (size notwithstanding), the rabbit would totally kill it. He’s way too brave for being like four pounds.

I also like long walks on the beach. No, but seriously. As long as it’s warm out. Yes, I am from Colorado. Yes, I think it is cold in San Diego in the winter. Yes I’m serious- why do you think I moved?

I study Literature-Writing and am working on a minor in Film Studies. Pretty much I read, write, and watch movies. Sweet deal. I learn vicariously through other people. I studied French for somewhere around nine years- I can read and write fluently. Speaking is, ahem, a separate matter entirely. We’ll call it functional. That seems appropriate.

I make crafts in my spare time and I sell things on-line through Etsy. I’m also a good cook. Not a good baker. Chocolate chip cookies are so difficult for me to make. Yeah, I don’t know either.

I like music, but I can’t sing. Once upon a time, I played the viola. I like dancing, but I can’t dance. See obsession with chick-flick dance films (Bring It On, I’m looking at you). I like the ocean and stuff, but I don’t swim very well. I like photography, but I wouldn’t consider myself good at it.

What am I good at? Loving people.

5 thoughts on “An Extended About Me”