Why I Find the Library Depressing

I went to the public library on Monday, for the first time in a long while. I have to say, the San Diego library system is kind of pathetic. Or maybe I just lived near an exceptionally awesome library growing up in Colorado. But more likely the former. Not that it’s entirely the fault of the San Diego library system. Let’s do a little math, shall we:

While I was clicking around in the library catalogue yesterday, I couldn’t help, but feel that most of the books I wanted to read just weren’t available. And they weren’t even obscure books either. I couldn’t find a copy of A Wrinkle in Time. I understand it was probably just checked out. But seriously, that book is older than dirt. It’s not like there’s an extensive waiting list for it. Furthermore, it’s a children’s classic (which I have still never read). I can’t believe they only have one copy.

I know I could just request the book from another branch, but the branch I was at doesn’t even have some of the books in its own collection. Which I also find depressing. 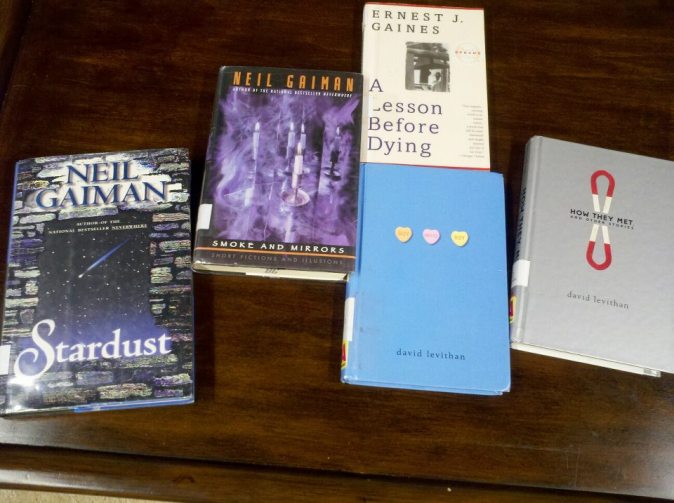 I left with five books, but not one of them was what I originally set out to find. There weren’t any copies available of Looking for Alaska or An Abundance of Katherines by John Green nor the novel Train Dreams by Denis Johnson, a novella that has garnered a lot of attention. I was also looking for Veronica Roth’s new book, Insurgent.

Every time I go in the library, I leave with a general sense of dissatisfaction. With all the hundreds of books being published each year, only a very small amount of them go on to live a second life in the library. I was sitting and looking at the books and thinking that while it looks like they have a lot of books, they really don’t. Those shelves contain selections of every book that has ever been. Which is really not a great thing to have laid before you as an aspiring author. So many books, but so many that never even get filtered into the library. What happens to all the rest of the books? Once their print run is extinguished in bookstores, is that just it?

Sadly, I think it is.

Luckily, there is Amazon.

I love Amazon. I just don’t want to accept that one of my favorite childhood haunts is becoming obsolete.

8 Comments on “Why I Find the Library Depressing”