Spoilers: If you haven’t seen this past week’s episode of Girls (I Get Ideas), don’t read.

Lena Dunham’s character on Girls, Hannah Horvath, is a stereotype in the best way and the worst way. But we do know that behind every stereotype is a grain of truth.

The Bad: Hannah is kind of crazy and neurotic and thinks she’s the world’s best writer.

The Good: See above. Writers are kind of crazy and neurotic. Some just act that way more than others. Also, we know that people need to have some level of belief in themselves to succeed, especially writers. Because if you don’t believe in you, why should anyone else? 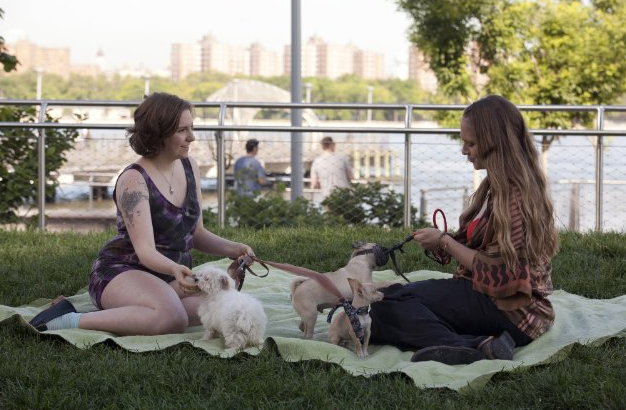 At the start of this week’s episode, Hannah has finally cut Adam out of her life, leaving her free to explore a relationship with Sandy. While her friends are glad she got rid of Adam, they’re not too keen on Sandy either. In typical Hannah fashion, she defends him.

Later in the episode, she goes to hang out with the newly-married Jessa. When Hannah tells her about Sandy, Jessa expresses disbelief that he hasn’t read her essay yet, though she gave it to him three days ago. Later, Hannah confronts Sandy about it. He first insists that he hasn’t read it, then cops that he did read it and didn’t like it, at which point Hannah goes off and somehow makes this about race and Republican values which, according to her, consist of gay people not getting to marry, women not being equal, and supporting guns. Anyway.

For once, I think Hannah has some valid points that she’s making (or illustrating, since the cohesion of her thoughts is a little suspect).

Don’t be with someone who’s afraid to tell you they didn’t like your writing and then lies about it. Seriously. 1) Lying is bad. 2) You need criticism to grow. 3) The other person should totally see that and push you to grow, even if you are thin-skinned.

While it’s debatable whether Sandy supports Hannah creatively or not, this point did come up in the episode, which makes it a fair point to address.

Don’t be with someone who doesn’t support you creatively. It’s not to say you can’t love them or they can’t love you, but your creative self is going to shrivel up in the process, under the omnipresent judgment of whether what your doing with your life is actually a valid choice.. You only need to spend five seconds with a person who thinks writing is a worthless pursuit to realize how uncomfortable that is. And also how bad that makes you feel– half like strangling the other person and half like wrapping yourself in a Snuggie and watching soap operas forever. The person you love and who supposedly loves you shouldn’t be a hater. We have the internet for that. Someone’s got to be in your court.

And what’s more, if they can’t love all of you and love you just as you are, why do they get to love part of you, the parts they choose?

Do you watch Girls? What do you think of Hannah or this week’s episode?

2 thoughts on “In Defense of Hannah Horvath (Girls)”