It’s been one year since all the adults disappeared. Gone.

Despite the hunger and the lies, even despite the plague, the kids of Perdido Beach are determined to survive. Creeping into the tenuous new world they’ve built, though, is perhaps the worst incarnation yet of the enemy known as the Darkness: fear.

Within the FAYZ, life breaks down while the Darkness takes over, literally—turning the dome-world of the FAYZ entirely black. In darkness, the worst fears of all emerge, and the cruelest of intentions are carried out. But even in their darkest moments, the inhabitants of the FAYZ maintain a will to survive and a desire to take care of the others in their ravaged band that endures, no matter what the cost. 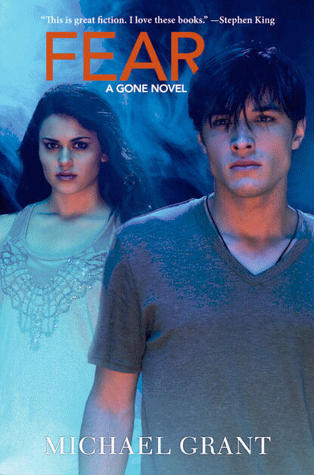 Each of the books in Michael Grant’s Gone series has a one-word title that loosely describes the plot of the book. Five books in and I know this. And still, I was surprised by how darn scary this book was.

All of the books in this series are scary. Let’s just be up-front about that. But the plot and characters are just so good, it keeps me pushing through, even though they make me not want to read them after dark, when I’m home alone. Still, this is definitely one of my favorite YA series and one of my favorites post-apocalyptic series.

Mutant coyotes, the Gaiaphage, Zekes, the kids themselves. There really isn’t any hope in this world. Which is what makes these books so compelling: that the good guys keep going when they should probably just lay down and die, because there isn’t a lot else left for them in the FAYZ.

From the beginning, I have felt bad for Diana. I especially felt bad for Diana when she got pregnant. And I can’t even begin to process that the Gaiaphage decided to inhabit her baby. That is just so messed up.

I’m glad Astrid and Sam finally had sex, though their moments are so romantic and gentle, they stick out really awkwardly in a book that is non-stop violence, gore, and terror.

With only one more book in the series, I have no idea how this will all be wrapped up. The lightening of the dome seems a good start. But the question remains: what happens when it opens???

I’m excited to read the last book in the series, Light. But I need to give myself a break for a little bit. If Fear was even more frightening and violent and scary as the books that came before it, as the series-concluded, Light is going to be craaazy.