Twenty thousand years ago, when man crossed the land bridge to North America, creatures called They Who Follow made the great trek as well. But once in the new continent, the giant beasts disappeared, whether into hiding or extinction, no one knew. Centuries later, a battered journal—the only evidence left from the night of the Romanovs’ execution—turns up in a rare bookstore. As the U.S. and Russians vie for the truth, and the lost Romanov treasure, they collide with a prehistoric predator thought long-extinct. It’s up to the Event Group to lay to rest the legends. On an expedition into the wilds of British Columbia, Colonel Jack Collins and his team make a horrifying discovery in the continent’s last deep wilderness, where men have been vanishing for centuries. 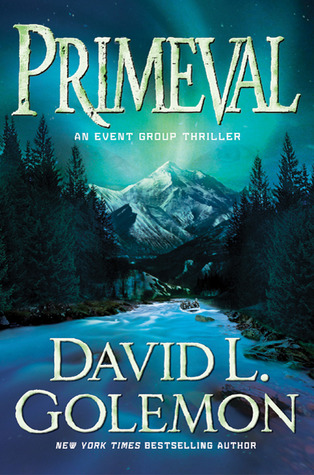 This one creeped me out a bit. A lot of the books in this series do, but this one in particular.

It was an interesting story that wove a bunch of half-truths and legends together: Sasquatch, what happened to Anastasia Romanov, and a military secret operation called Solar Flare. I think it was interesting how these three things were pulled together, but how the characters actually uncovered all the pieces was a bit confusing. There were a number of characters pretending to be something they’re not, changing sides, and telling lies. Which I would normally be okay with, but I got a bit lost with all the motivations.

The Sasquatch creatures were pretty terrifying. If something like that actually existing…sheesh. Fast, strong, big, ruthless, and good at camouflaging themselves…a perfect predator, except they’re not predators. Just really, really, really good at defending their territory and their own creatures.

I liked that it was revealed Jack has a sister. It was nice to see another vulnerable point for him, other than Sarah. His sister was so sassy, too. And I liked that Ellenshaw was a main character in this one again.

Still, this one was a good thriller romp that I thoroughly enjoyed. It kept me up reading it and trying to sneak in a few pages here and there. I’m definitely looking forward to reading the continuing adventures of the Event Group!