The Madame by Julianna Baggott

West Virginia, 1924: Alma works in a hosiery mill where the percussive roar of machinery has far too long muffled the engine that is her heart. When Alma’s husband decides that they should set out to find their fortune in Florida, Alma has little choice but to leave her three children and ailing mother behind. But when Alma is then abandoned at a Miami dock, she is suddenly forced to make her own way in the world. With the help of a gentle giantess and an opium-addicted prostitute, Alma reclaims her children from the orphanage and forges ahead with an altogether new sort of family. As an act of survival, she chooses to run a house of prostitution, a harvest that relies on lust and weakness in men, of which “the world has a generous, unending supply.”

The Madam is the story of a house of sin. It is here where Alma’s children will learn everything there is to know about “love and loss, sex and betrayal.” Based on the real life of the author’s grandmother, The Madame is a tale of epic proportions, one that will haunt readers long after its stunning conclusion.

This is a very whispery, dreaming book, as if you could somehow manage to stay in the place in between sleep and wake. This book was very engrossing, like being wrapped in a warm blanket you can’t get free of, but don’t really want to anyway. Though I must say, this book was quite sad. I am the type of person that gets upset when other people get “stuck” or have difficult problems they are unable to solve or circumvent. I just want to fix everyone’s lives and it weighs on me when I can’t, even if the problem has nothing at all to do with me. This book was sort of like a never-ending moment of that. Everyone has a difficult, imperfect life, and they struggle, struggle, struggle through every single day of their lives.

The prose was very beautiful and skillfully done. Though combined with the way the story was written, it felt as if everything were covered in a thin gauze, rather than something visceral you could touch. It was just very dreamy and floated away when you tried to grab hold of it.

This is the first book I have read by this author and I’m interested in checking out more. Hopefully they won’t be quite as sad to me! 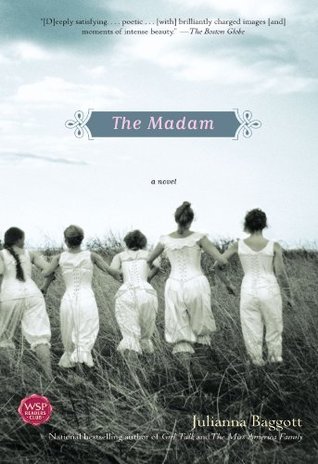