After escaping from the Brenda T. Trumball Correctional Facility for Women and stealing the identity of rich socialite, Ariana Osgood finally thought she was on the path she always believed she deserved. But her past caught up with her and she is forced right back to her old ways, making everything she wants seem further out of reach. And some familiar faces are back to make things even worse for her.

A few years ago, I watched one of Stanley Kubrick’s early films in my film class. The Killing is about a group of crooks who plan and pull off a racetrack robbery. Long story short: shortly after they get their money, things start to unravel. Much as all of Ariana’s plans do in this book.

This novel really tied up her storyline nicely. Ariana’s obsession with killing Reed Brennan drives this book and, as is so often the case, her obsession blinds her and allows her to get sloppy.

As it’s the last book in the series, I won’t say too much, but fans of this series and Private won’t be disappointed by this ending! 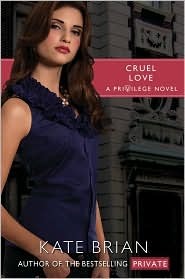