Against Their Will: The Secret History of Medical Experimentation on Children in Cold War America

During the Cold War, an alliance between American scientists, pharmaceutical companies, and the US military pushed the medical establishment into ethically fraught territory. Doctors and scientists at prestigious institutions were pressured to produce medical advances to compete with the perceived threats coming from the Soviet Union. In Against Their Will, authors Allen Hornblum, Judith Newman, and Gregory Dober reveal the little-known history of unethical and dangerous medical experimentation on children in the United States.  Through rare interviews and the personal correspondence of renowned medical investigators, they document how children—both normal and those termed “feebleminded”—from infants to teenagers, became human research subjects in terrifying experiments. They were drafted as “volunteers” to test vaccines, doused with ringworm, subjected to electric shock, and given lobotomies. They were also fed radioactive isotopes and exposed to chemical warfare agents. This groundbreaking book shows how institutional superintendents influenced by eugenics often turned these children over to scientific researchers without a second thought. Based on years of archival work and numerous interviews with both scientific researchers and former test subjects, this is a fascinating and disturbing look at the dark underbelly of American medical history. 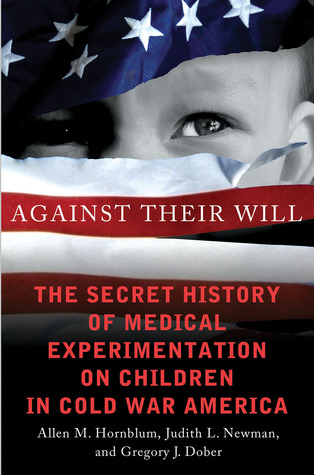 I had the honor of helping to do a small piece of the research for this book while an undergraduate at UCSD. Jonas Salk, the creator of the Polio Vaccine, was a big beneficiary to the school later in his life and as a result, much of his research files ended up in the UCSD Archive Collection. If you’ve never done archival research before, it is fascinating and rewarding. Getting to work with old texts and documents is like a treasure-hunting dream.

Upon receiving Against Their Will from the authors, I was excited to get to read the whole story. I know what I’d read and seen, but it was just a very small part of the puzzle.

I suppose you could say this is a difficult book to read. I think that while doing the research that I did, I kind of got desensitized to it, as sad as that is to say. But I want to make it clear that this is by no means a happy a book. It contains the chronicles of medical researchers in America and how their research trials, while ultimately contributing to vaccine research and our larger body of medical knowledge, were conducted on innocent children, some of them just days-old babies.

This is a great overview of the face of medical science post-WWII. We’ve all of course heard of the terrifying experiments the Nazi doctors conducted on their Jewish prisoners. Some of us have heard of the Nuremberg trials and the subsequent introduction of the Nuremberg code. But what you don’t hear about is that essentially the same was happening and continued to happen, in America. It seems that most doctors felt that since their intentions were more “honorable” than the Nazis and would ultimately be of more benefit to society, certain facets of the Nuremberg code could be overlooked. Though as this book points out, if you look at the hard evidence of what these scientists were doing, it isn’t all that much different than what the Nazis did.

Radiation treatments, shock therapy, involuntary sterilization, psychological bullying, castration, ringworm, lobotomies. These are only a few of the many horrors that awaited institutionalized children in America. Young children were often forced into the experiments, will little or no consent by the parents or children themselves. These experiments sometimes resulted in death, maiming, extreme psychology disturbance, and lasting health issues that weren’t or couldn’t be corrected.

Much of what we know about science and disease and how the human body works, comes as a result both of the Nazi experiments on the Jews and the American Scientists experiments on institutionalized children, adults, and prisoners. As Against Their Will argues, certainly we have a gained a lot in our knowledge, but did we pay too high a price for it? In the quest for knowledge, did our American Scientists strike a Faustian bargain with the Devil?

The book sums it up best with this closing line:

“Scientific progress and the medical advances it fosters is a process we can all celebrate, but the attainment of such triumphs on the backs of children and other powerless groups makes their realizations all the less impressive and praiseworthy”.