An Abundance of Katherines

On a road trip miles from home, this anagram-happy, washed-up child prodigy has ten thousand dollars in his pocket, a bloodthirsty feral hog on his trail, and an overweight, Judge Judy-loving best friend riding shotgun–but no Katherines. Colin is on a mission to prove The Theorem of Underlying Katherine Predictability, which he hopes will predict the future of any relationship, avenge Dumpees everywhere, and finally win him the girl. Love, friendship, and a dead Austro-Hungarian archduke add up to surprising and heart-changing conclusions in this ingeniously layered comic novel about reinventing oneself. 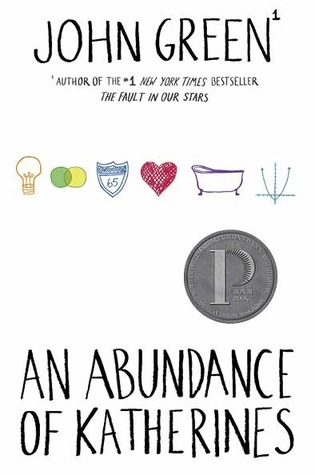 I first tried to read this book way back when it came out in 2006. It was my first John Green experience and sad to say, it put me off John Green for the next six years, until a friend kindly forced me to read The Fault in Our Stars. And now that I’ve read every other John Green novel and contribution (see: Looking For Alaska, Paper Towns, Will Grayson Will Grayson, Let It Snow), it was time to revisit An Abundance of Katherines.

The beginning of this book is definitely difficult. I might have considered giving up again if I didn’t know the genius of John Green and wasn’t committed to finishing all of his books. The math, which is so important a part of the book, initially turned me off. But I stuck with it and ended up liking the style it was written in.

The plot itself was interesting, full of witty, smart teenagers and classic John Green humor. I wish that the part of the story that took place in Gutshot was longer, just because I wanted to spend more time in Gutshot. I also like the plot point about the Archduke and the pig-hunting excursion.

While I ended up liking this book on a second attempt, it was my least favorite of John Green’s books, but definitely still worth a read!

Have you read An Abundance of Katherines? Or any of John Green’s other books?

← Featured Poem: A death blow if a life blow to some
Seeking Beta Readers →