Naples, 1750. In the dead of night, three men with swords burst into the palazzo of a marquis. Their leader, the Prince of San Severo, accuses the marquis of being an imposter, and demands to know a secret only the marquis harbors. In the fight that ensues, the false marquis escapes over the rooftops of Naples, leaving behind a burning palazzo and a raging prince now obsessed with finding his quarry at any cost.

Baghdad, 2003. An army unit on a routine mission makes a horrifying discovery: a state- of-the-art, concealed lab where dozens of men, women, and children have died, the subjects of gruesome experiments. The mysterious scientist they were after, a man believed to be working on a bioweapon and known only as the hakeem “the doctor” escapes, taking with him the startling truth about his work. A puzzling clue is left behind: a circular symbol of a snake feeding on its own tail.

As the power of the symbol comes to light, revealing the centuries of destruction left in its wake, one unsuspecting woman stands at the center of a conspiracy that could change the world forever. 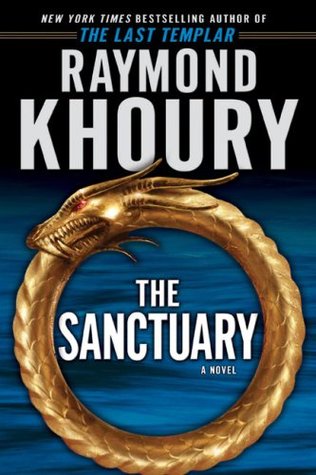 I read Khoury’s The Sign several years ago. I haven’t read his bestseller, The Last Templar, but both The Sign and The Sanctuary have the same sort of issues.

I really liked the beginning of this book. It was interesting and keep me reading. I enjoyed exploring Lebanon as I haven’t read many books that have been set there. I also liked that it kind of tied in with the fall of Saddam in Iran and the relations of Middle Eastern countries, particularly with the US.

The mystery was intriguing…I love these kind of historical-contemporary thriller hybrids. Use the words “codex” or “mysterious book” and I’m there.

Both The Sign and The Sanctuary pulled me and kept me reading with the suspense, but failed to really pack a punch with the ending. In both books, I felt sort of let down. I don’t think the ending to this book was bad, just maybe that there was too much build-up, making it incredibly difficult to pull off a satisfactory payoff.

Also while I liked the historical fiction flashbacks to Italy in the 18th century, I’m not sure if it was necessary or needed to be so detailed to justify what all the characters were doing in the present day.

Overall, I think Khoury’s novels are great plane or vacation books, when you have lots of time and just want to escape for several hours.