The Hunt For Atlantis

Archaeologist Nina Wilde can find long-lost Atlantis, helped by reclusive billionaire Kristian Frost, his beautiful daughter Kari, and ex-SAS bodyguard Eddie Chase. But a powerful and mysterious organization opposes revealing the secret submerged for 11,000 years. Others have already died — Nina’s own parents. From the streets of Manhattan, Brazilian jungle, Tibetan mountaintop, to the bottom of the Atlantic Ocean, they race to save all human life on earth.

This book is exactly my cup of tea. An ancient secret, a book so action-packed it’d make a better movie, racing to the save the world, yup, that’s a book I’d enjoy.

And this one was exactly what I’d hoped it would be. I didn’t want to stop reading it, I just wanted to keep going and see what they discovered.

The dialogue wasn’t as horrid as it can sometimes be in these types of books. Eddie Chase was pretty funny all on his own.

I really liked that they went beyond just discovering Atlantis….they found Atlantis AND so much more. It was a nice update to this story of Atlantis, giving something fresh to a mystery that has been so speculated about.

The one thing I thought was a little off, was that they didn’t address why the bad guys were trying to stop them from finding Atlantis or particularly why the Frosts wanted to find Atlantis, until halfway through. That seems like kind of a big thing that should have been addressed much earlier in the book. 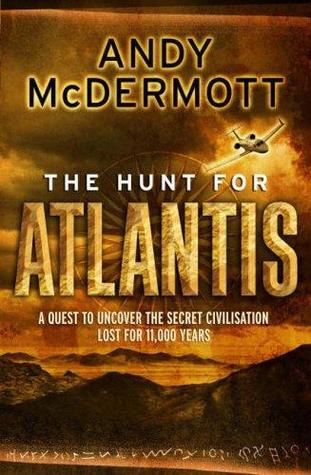 I’m definitely going to be reading more Andy McDermott, especially since The Hunt for Atlantis is the first in a series featuring Nina Wilde and Eddie Chase, trying to find and protect the world’s greatest secrets.