In NightShade nothing is as it seems . . .

Eleri Eames didn’t think she’d ever be allowed to work for the FBI again, so the special FBI division of NightShade seems like an amazing opportunity. But all too soon, her chance to start over starts to disturb her.

When the FBI offers Donovan a chance to leave his job as a medical examiner and try his hand at something new, he takes a chance on the NightShade division. Somehow, he has to try to escape from his shadows, but can he trust Eleri with the truth?

Thrown together on their first case, Eleri and Donovan must deal with a charismatic cult leader and his true-believers. The cult is mixed up with several decade-old kidnapping cases and the missing daughter of a prominent FBI Agent. As Eleri and Donovan dig deeper, they discover that NightShade’s mysteries aren’t coincidence. 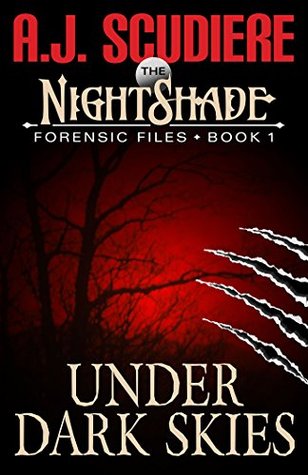 *I was provided with a free copy of this book in exchange for an honest review.

This is one of those series where I think I will enjoy reading the subsequent books more than the first one. The introduction of the two characters felt a bit strained at times, especially in the beginning. But by the end of the book, I was all in for Eleri and Donovan and ready to read more about them and NightShade. I still don’t think I particularly like Eleri, but I love Donovan. Eleri kind of rubs me the wrong way, but half the book is narrated by Donovan, so I can deal.

Going in, we are immediately provided with the information that both Eleri and Donovan have secrets and that perhaps those secrets are exactly why they’re been recruited to NightShade. So once we get all of that information out on the table, this becomes a really good book.

The plot was certainly interesting. Eleri and Donovan are on the trail of a secret cult whose believers keeps turning up sick, injured, or dead. While they work quickly to solve the case, the energy and the pacing definitely kept me turning the pages.

This book seems to get compared to the X-Files (haven’t read/watched). I would also suggest if you were a fan of the tv show, Fringe, you would like this book. I will definitely be looking out for the next books in the series!

← I Know Why the Caged Bird Sings
Featured Poem: Nirvana →