Dr. Rob Elwood, a respected geologist, has studied the Cascadia Subduction Zone, a dangerous fault off the coast of the Pacific Northwest, for years. Now he’s having repeated nightmares of a massive earthquake and tsunami striking the region. Knowing he’s placing his reputation and career at risk, he goes public with his premonitions.

The quake fails to occur and Rob fears he’s lost everything. But the disaster does strike, just not when expected, and Rob finds himself not only vindicated, but hurled abruptly into a life-and-death rescue mission with his private aircraft.

Rob’s story intersects with several others, including that of a retired fighter pilot attempting to make amends to a woman he jilted twenty-five years earlier, and another of an elderly black man searching for legendary buried treasure along the rugged Oregon coast. 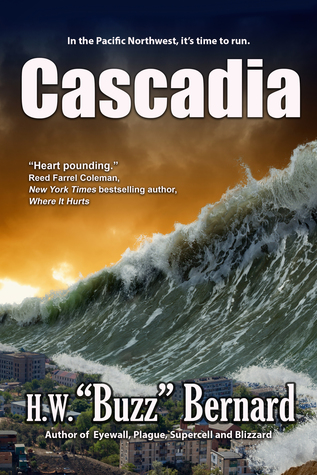 I’m a huge fan of action movies. Even if someone tells me it’s a bad movie, I’ll still go watch it because, as long as things are blowing up, how can it really be a bad movie? I’m not expecting an Oscar-winning film. Just to see special effects and things set on fire.

The beginning of Cascadia was a bit heavy-handed with the explanation of earthquakes and how they work, etc, though I definitely walked away knowing more about earthquakes than I did before. I also wish more time had been spent introducing the main characters before the earthquake hit. But like I said, I’m not expecting Pultizer prize-winning writing. I just want to be entertained.

And I was! This book is very exciting and is everything you could want in a disaster movie, er, book. Widespread devastation, high stakes, narrow escapes, ordinary people turned heroes, it’s all here.

Jonathan and Zurry were by far my favorite characters. I love a good treasure hunt story and the fact that this was a sub-plot in a disaster story made it even better.

The only part I really couldn’t get my head around was the plotline with Cassie. It seemed very out-of-place and didn’t do much for the story.

Overall, a very enjoyable read that would be great for summer!