Bridge of Sighs by Richard Russo

Louis Charles (“Lucy”) Lynch has spent all his sixty years in upstate Thomaston, New York, married to the same woman, Sarah, for forty of them, their son now a grown man. Like his late, beloved father, Lucy is an optimist, though he’s had plenty of reasons not to be—chief among them his mother, still indomitably alive. Yet it was her shrewdness, combined with that Lynch optimism, that had propelled them years ago to the right side of the tracks and created an “empire” of convenience stores about to be passed on to the next generation.

Lucy and Sarah are also preparing for a once-in-a-lifetime trip to Italy, where his oldest friend, a renowned painter, has exiled himself far from anything they’d known in childhood. In fact, the exact nature of their friendship is one of the many mysteries Lucy hopes to untangle in the “history” he’s writing of his hometown and family. And with his story interspersed with that of Noonan, the native son who’d fled so long ago, the destinies building up around both of them (and Sarah, too) are relentless, constantly surprising, and utterly revealing. 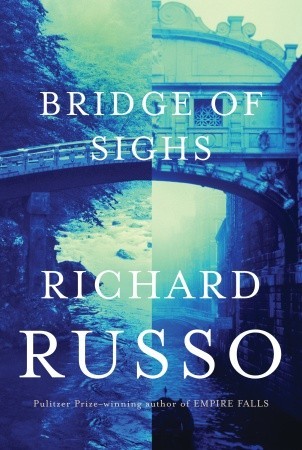 This was my third novel by Richard Russo and it has further convinced me that not only is he one of the best American writers today, nobody writes melancholy better than he does.

While this wasn’t the best book to bring on a beach vacation, it was still a great read. In only the way Russo can, he manages to paint small town life irresistibly. The recounting of Lucy’s childhood in Thomaston is sentimental and full of the longing of simpler days and lives. While I’ve never known a life like Lucy’s, it’s hard not to look at the events unfolding in the world and wish for the insulated quiet of a tiny town in mid-century America.

Bridge of Sighs is primarily Lucy’s story, with brief interludes from Bobby and Sarah. Bobby and Sarah’s POV’s are not well balanced with Lucy’s, but they do provide some much-needed perspective. Lucy is a fairly untrustworthy narrator, by virtue first of being a child and later of stubborn naivety.

Bridge of Sighs is populated by memorable, well-developed characters though not quite so humorous as those in Empire Falls, unfortunately. The melancholy is definitely strong in this novel!