Prue McKeel’s life is ordinary. At least until her brother is abducted by a murder of crows and taken to the Impassable Wilderness, a dense, tangled forest on the edge of Portland. No one’s ever gone in—or at least returned to tell of it.

So begins an adventure that will take Prue and her friend Curtis deep into the Impassable Wilderness. There they uncover a secret world in the midst of violent upheaval—a world full of warring creatures, peaceable mystics, and powerful figures with the darkest intentions. And what begins as a rescue mission becomes something much greater, as the two friends find themselves entwined in a struggle for the very freedom of this wilderness. A wilderness the locals call Wildwood.

The first book in the epic middle-grade fantasy series full of magic, wonder, and danger—nothing less than an American Narnia—from Colin Meloy, lead singer of the highly celebrated band the Decemberists, and Carson Ellis, the acclaimed illustrator of the New York Times bestselling The Mysterious Benedict Society. 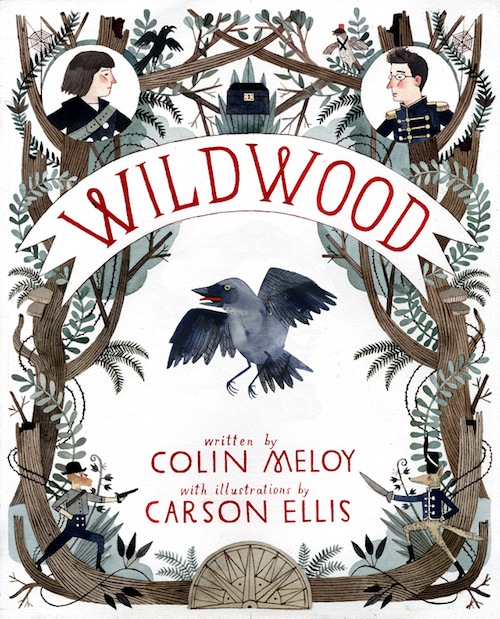 I usually read a lot of reviews for books from a new author before actually buying the book, so I normally have a pretty good idea what the book is about and whether I will like it or not. This book was given to me and that I didn’t really know all that much about what kind of experience I could expect from it.

Wildwood is populated by an interesting cast of characters and overall, I quite enjoyed this book. It’s set in Oregan and feels very Oregonian, from the descriptions of the forest to the illustration of the people, who all looked like bearded, beer-drinking Portland hipsters. Honest. Just flip to a picture of the bandits.

At first, I thought this book was intended to be read to children. And then I decided that the book was a little too dark for that. I don’t read much middle grade so I’m not sure if this is a good entry for that particular genre or not. I was expecting to find the story a bit predictable, but it really wasn’t.

Wildwood is the first in a planned trilogy with Under Wildwood being the second book in the series and Wildwood Imperium is the third.