The Moon is Down by John Steinbeck

Occupied by enemy troops, a small, peaceable town comes to face-to-face with evil imposed from the outside–and betrayal born within the close-knit community. As he delves into the motivations and emotions of the enemy commander and the quisling traitor, Steinbeck uncovers profound, often unsettling truths about war–and about human nature. 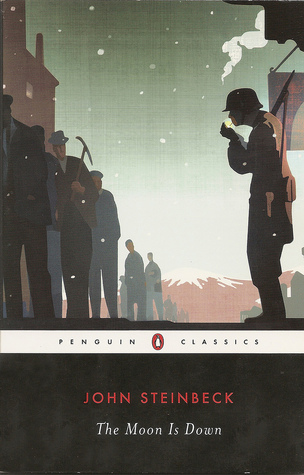 I kinda sorta forgot how much I like Steinbeck. Reading The Moon is Down was like getting a hug from an old friend. Steinbeck is one of those authors I enjoy both because of what he writes and how he writes it. I find his writing to be influential to me because like Steinbeck, I find myself more and more interested in how simply I can express things and how many common words can be strung together to build something beautiful rather than diving for the thesaurus.

I read the Penguin Classics edition of this book which had a fascinating forward. The Moon is Down was conceived during the height of World War II and was intended as Steinbeck’s contribution to the war effort. Indeed, years later it was determined that The Moon is Down was the most popular work of propaganda in occupied Western Europe. Thousands of illegal copies were printed and distributed in such countries as Norway, Denmark, Holland, and France. Thousands more copies were read in unoccupied parts of Europe and even as far as way as China. The title of the novel actually comes from Macbeth and is a reference to the looming threat of evil.

The Moon is Down is a very short book like Of Mice and Men. I think, given our current political climate, this book deserves a reread (or a first reading) if only for the understanding of some of its most moving passages and its reminder of the quiet strength of individuals in the face of unequivocal threat. I’ll leave you with this quote that I particularly enjoyed from the final pages of the book:

“In a time of need leaders pop up among us like mushrooms.”

2 thoughts on “The Moon is Down”