I skipped a week.

It was a good week, just too busy to write it all up.

This week was busy, too, that only reason this blog happened was because I went on a vacation!

Well. A working vacation. Maybe I’ll get to take a real vacation before the year is over. Haha. Or maybe not. I’m just excited that on 21st of July, I took the whole day off. Whole day! Imagine that! My last day off was March 31st.

Anyway. Really committed to trying to shorten up these week in review posts. Lately I’ve been feeling like I’ve hit a good stride with my content schedule for Minute Marketing. But my personal/author blog has definitely been left in the dust and it’s mostly because this blog takes forever to do.

So to make up for the lack of consistent posting, here’s a largish update on Shadow of the Magician:

Last time I mentioned I was a little more than halfway through the revision, word count wise. But I’ve definitely slowed down a lot and have been struggling lately. I’ve been super disappointed about that, wondering how I was going to get out of the doldrums of the middle of the book and also make this not terrible for anyone else to read. But I had a great talk with my writer’s group on Monday and I think I know how to fix it. Yay!

I’m always amazed at how my unconscious brain seems to know what’s wrong with the book before I consciously figure it out. Any other writers experience this? Anytime the writing feels hard, I invariably realize there’s something wrong with the plot in that area. Of course, it takes me days or weeks to realize exactly what part is the problem. But it’s really incredible how my unconscious brain doesn’t let me cruise on by and keep moving forward to the end. And it would be SO easy for that to happen.

I’m still really excited about how the book is coming together. Really excited about. So here’s my plan for the next few months: hoping to finish these edits either this month or next (but I really hope it’s this month). Then I’m going to get my pitch materials together and if all goes well, start querying agents hopefully in October/November before they close up shop for the holidays. This is probably too ambitious of a timeline, but whatever. A goal is a goal.

If you’re excited about maybe someday actually getting to read Shadow of the Magician, leave me a comment below!

Started off Monday at the barn with Miss Pia. Is there any better way to start the week than at one of your favorite places? I honestly doubt it. Ended up running back to Mary’s again to buy Pia a fly mask because I literally just gave hers to Escobar cause she’d been fine with the flies all summer…until Monday when one of her eyes was all irritated. Luckily, Mary’s had a cute grey and pink version – it even has ribbons on it because it’s for breast cancer awareness or something like that. Anyway, she looks really cute in it. No pictures though because I needed to get to work.

Monday I really tried to squeeze in a lot of work before writer’s group because I knew I was going away for a few days and wanted to do as much as I could before I left. Tried to go to the library, got annoyed with all the people in the library, went to Panera Bread, got annoyed with how much stuff costs, but at least they have A/C, electrical outlets, AND chocolate chip cookies. It’s not all bad, I guess.

Honestly, on Tuesday I was kind of a mess. Was twenty minutes late to my morning meeting because I made at least five wrong turns. Not even exaggerating. I just could not drive the right way to save my life. We were meeting at Holsem so I thought I’d make up time by paying to park in the garage rather than looking for free parking. Except right when I pulled up, the gate to open the garage stopped working and that was a whole production for the parking attendant. Luckily, when I came back later she gave me free parking. Which is great because I promptly went home and bought one of those holder things for the phone so I can see the map while I’m driving.

I stayed at Holsem until lunchtime. Holsem is actually not a bad place to work. I got a lot done there. Too bad it’s more than twenty minutes from my house. After I finished at Holsem, I walked over to Pigment because I was thinking of recording my Quick Tip Tuesday video for Minute Marketing in front of their fabulous pink wall. But I realized that a) I’m not ready to take a selfie video on a street full of people b) I forgot my sunglasses in the car and c) it was like 90 degrees out.

Ended up shooting the video in my car before my next meeting in Carmel Valley. Thanks everyone who told me I looked great in that video! You too can get the look – all you need is an iPhone and a Chevy Trax natural windshield light filter! Make sure you don’t wash your car for two months – those dirt spots give your face a natural glow!

Seriously, what did I do to deserve you all? Lol.

Wednesday I went back to the barn for my last ride on Pia for the week. We have the Regional Adult Amateur Championships (RAAC) show in two weeks so I’m starting to get nervous about that. Hoping it goes better than the Temecula show. And better than the last RAAC. Last RAAC, we came in dead last. I think any place that’s not last would be cool. See, not all my goals are lofty.

Wednesday was another power work day followed by a night of packing for my trip to Colorado and daydreaming about the cooler weather I was about to experience.

Thursday I got up to do some work before the airport and…(I swear it’s always like this) ended up with a bunch of last-minute work I needed to cram in before I left for the airport. Much stress. Do not like. Luckily, the airport process itself was a breeze which was great because I did not leave at the time I planned to.

I had set aside the plane time as time to work on my book. Which was awesome. Got into a great groove. Which meant the flight was not nearly long enough. It seriously felt like twenty minutes.

Had a pretty smooth landing into Denver which I was immensely grateful for. I get motion sick and I tend to end up flying to Colorado when the weather is craziest. Also, I just don’t like turbulence. At all.

Got home from the airport just in time to leave to go meet some of my friends for sushi. I was so grateful and surprised by how many of my friends were able to make time for dinner with me since they don’t live around Arvada anymore. It was such a great night and the food was good, too.

Friday I got up early to work for awhile before my mom and I drove up to Estes Park to see my dad at his horse show. We rent a cabin up there which is super fun. Forget a beach house, some day I want to have a cabin in the mountains as a vacation home/writing retreat! After connecting at the cabin, we had dinner at the Dunraven Inn, which is a great spot for Italian food, but it’s on the outside of town so you will need to drive to it. But worth the trip! Make sure to make a reservation though.

Saturday morning we went to the horse show to watch my dad ride and then we had lunch in downtown Estes Park at The Grubsteak. The burgers were SO good. I was surprised and so happy because I was starving.

After lunch, we walked around downtown before we went back to the cabin and then had dinner on the lake. Squeezed in a little more writing time after dinner and some reading before bed. Yay!

Sunday morning we packed up to go back home. Watched my dad at the horse show before driving back to Arvada. Then I did a little work before I went to meet my friend for dinner in Loveland and repacked to fly back to California on Monday. 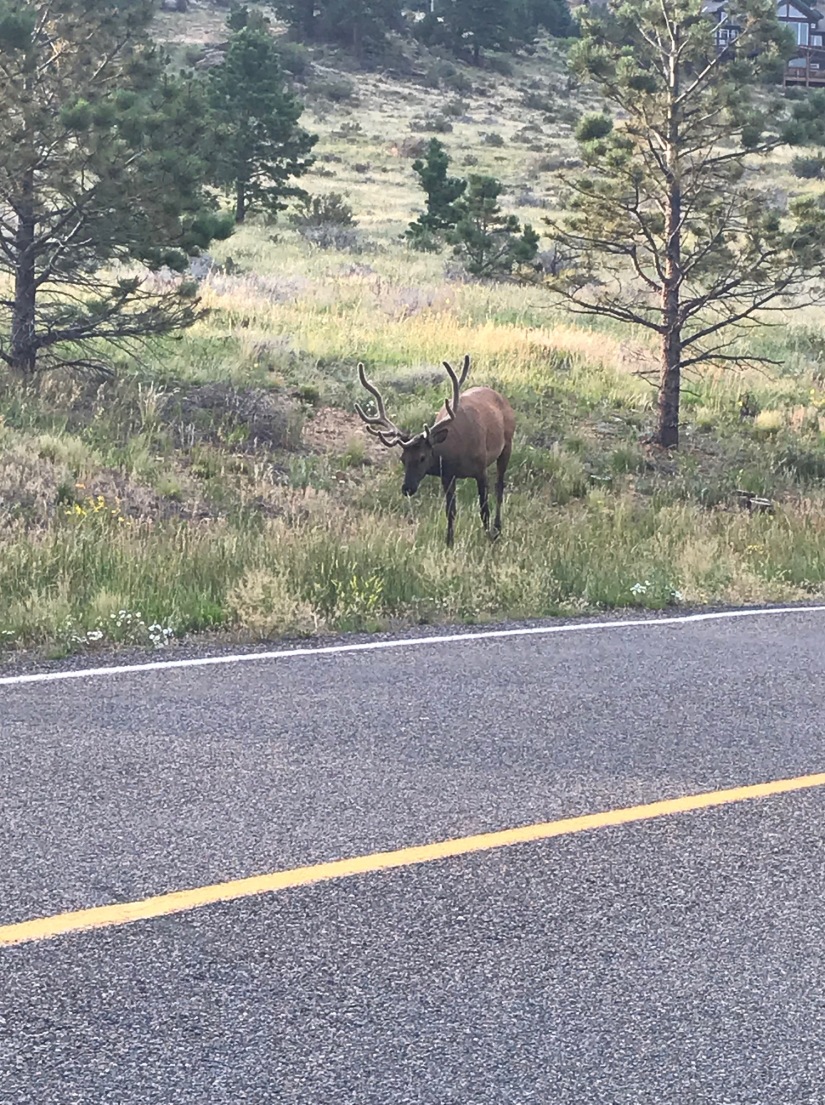 One Horn to Rule Them All: A Purple Unicorn Anthology edited by Lisa Mangum

How to Write Copy That Sells by Ray Edwards

What I’m Listening To:

My Shadow of the Magician playlist. I make a playlist for each book I write and I did so much writing this week, the songs are stuck in my head.

Nothing – is anyone surprised by this anymore?