Walk on Earth a Stranger by Rae Carson

Lee Westfall has a strong, loving family. She has a home she loves and a loyal steed. She has a best friend—who might want to be something more.

She also has a secret.

Lee can sense gold in the world around her. Veins deep in the earth. Small nuggets in a stream. Even gold dust caught underneath a fingernail. She has kept her family safe and able to buy provisions, even through the harshest winters. But what would someone do to control a girl with that kind of power? A person might murder for it.

When everything Lee holds dear is ripped away, she flees west to California—where gold has just been discovered. Perhaps this will be the one place a magical girl can be herself. If she survives the journey. 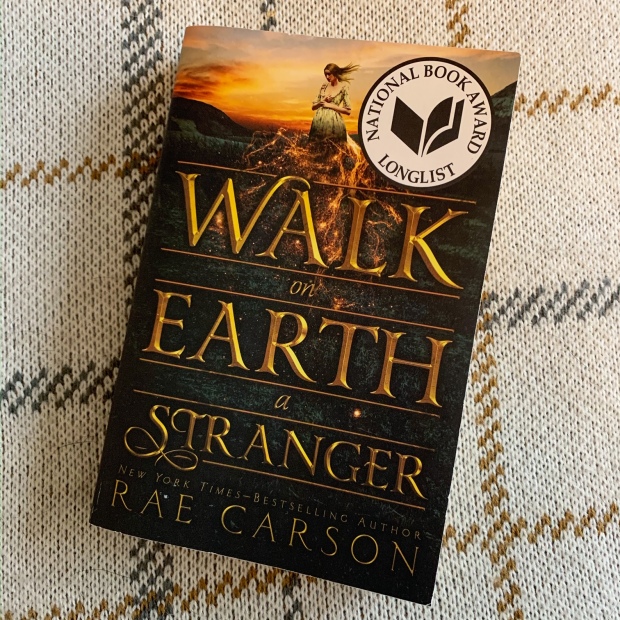 I’ve been interested in reading this series ever since I first heard the premise. But I moved it up many spaces on the TBR list after I decided it might possibly be a comp title for my book.

As a nineties kid who remembers playing Oregon Trail on the school computer, I really enjoyed this book. While not about the Oregon Trail, the plot follows Lee as she navigates a dangerous cross-country migration from her home in Georgia to California, the land of gold and plenty. The story is immersive, full of rich details, and peril around every corner. The fact that this historical fiction story has a touch of magic to it is just icing on the cake.

Lee is a great heroine: tough, smart, and willing to do whatever it takes to save herself and those she loves. It’s no surprise to me that this book was nominated for and won several awards. Lee is exactly the type of female character we still need more of in young adult literature. Not a spoiler per se, but for a section of the book, Lee travels alone with only her horse and a gun to protect her. If that’s not the type of kick-ass woman our kids and teens need to be reading, I don’t know what is!

If you’re looking to pick up a young adult book that doesn’t make use of the “chosen one” trope – this one is for you. Yes, there’s magic, but only a touch. It’s not history-inspired fantasy or alternate history. It’s just a great work of historical fiction that happens to have a bit of magic to it.