The Girl With Ghost Eyes

The Girl With Ghost Eyes by M.H. Borosan

It’s the end of the nineteenth century in San Francisco’s Chinatown, and ghost hunters from the Maoshan traditions of Daoism keep malevolent spiritual forces at bay. Li-lin, the daughter of a renowned Daoshi exorcist, is a young widow burdened with yin eyes—the unique ability to see the spirit world. Her spiritual visions and the death of her husband bring shame to Li-lin and her father—and shame is not something this immigrant family can afford.

When a sorcerer cripples her father, terrible plans are set in motion, and only Li-lin can stop them. To aid her are her martial arts and a peachwood sword, her burning paper talismans, and a wisecracking spirit in the form of a human eyeball tucked away in her pocket. Navigating the dangerous alleys and backrooms of a male-dominated Chinatown, Li-lin must confront evil spirits, gangsters, and soulstealers before the sorcerer’s ritual summons an ancient evil that could burn Chinatown to the ground. 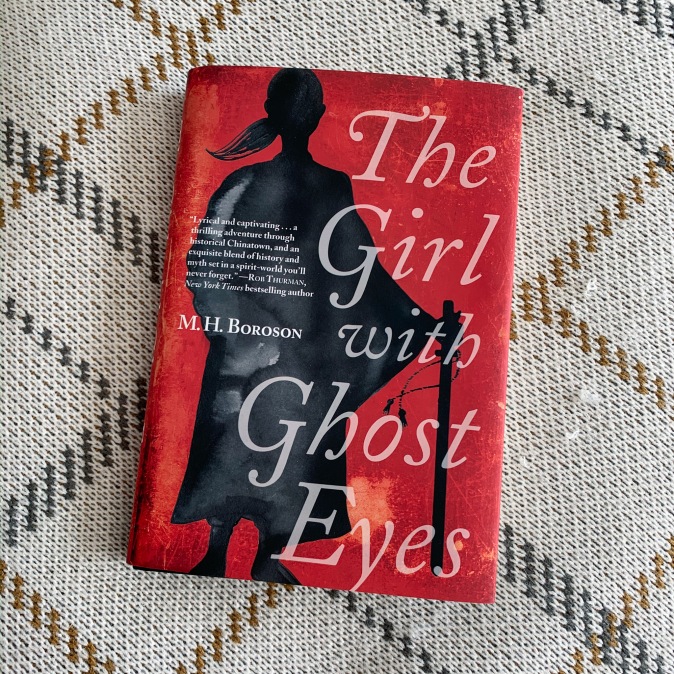 This book was a fun ride from start to finish. I had to put it down when I went to Colorado for Christmas since I chose to bring (and finish!) Kingdom of Ash instead, but once I was back home, I could scarcely stop reading it. It’s unlike anything I’ve ever read and is absolutely delightful. I really hope someone makes it into a movie or tv show in the near future.

But aside from being a lot of fun, the history feels real, visceral, and well-researched. Reading through the author’s note at the back, I get the sense the author knows his stuff and so bends the facts of history/story/culture with a careful, precise hand to tell this compelling story.

I’ve already picked up the second book in the series to read, The Girl With No Face, which just came out in October. I’m looking forward to tucking into that as well, though after that’s done I’ll be stuck waiting for the next one to come out!

← Kingdom of Ash
The Bear and the Nightingale →