Here, There Be Dragons by James A. Owen

An unusual murder brings together three strangers, John, Jack, and Charles, on a rainy night in London during the first World War. An eccentric little man called Bert tells them that they are now the caretakers of the Imaginarium Geographica — an atlas of all the lands that have ever existed in myth and legend, fable and fairy tale. These lands, Bert claims, can be traveled to in his ship the Indigo Dragon, one of only seven vessels that is able to cross the Frontier between worlds into the Archipelago of Dreams.

Pursued by strange and terrifying creatures, the companions flee London aboard the Dragonship. Traveling to the very realm of the imagination itself, they must learn to overcome their fears and trust in one another if they are to defeat the dark forces that threaten the destiny of two worlds. 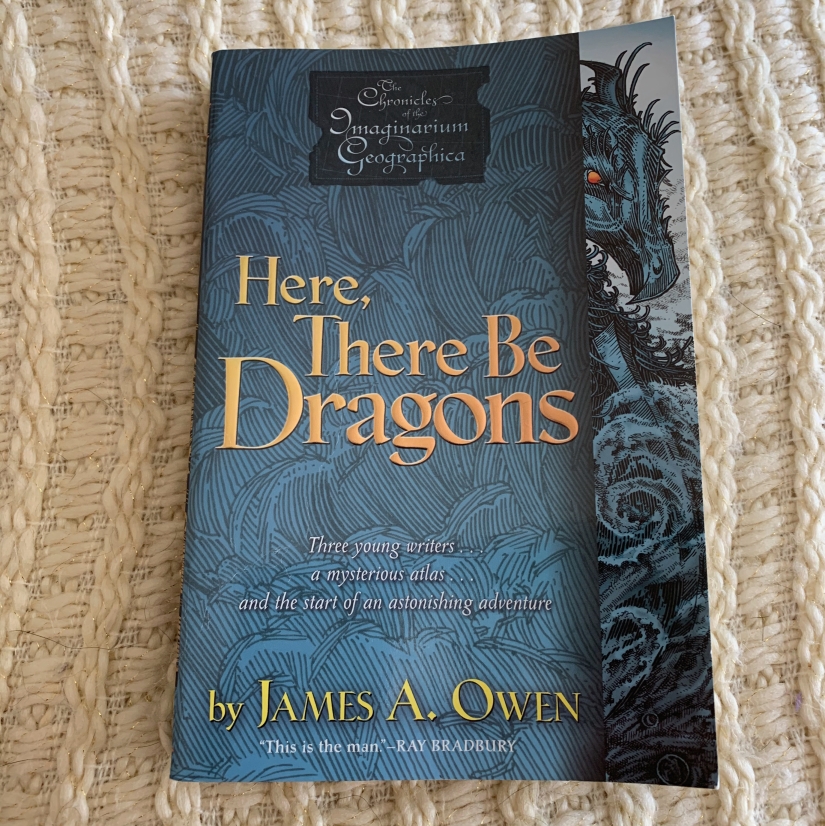 I met the author of this book (and the subsequent other titles in the Chronicles of the Imaginarium Geographica series) a few years ago at Superstars Writing Seminars in Colorado Springs. I’ve heard the story of this book’s publication a few times and it never fails to both impress and move me to tears. But only recently did I get around to reading the first book in the series.

It proved to be another perfect quarantine pick. Imaginative, fun, charming – the perfect antidote to long days of worry about the world, cabin fever, and growing wanderlust.

To me, Here, There Be Dragons is a wonderful nod to classic children’s fantasy by Tolkien, C.S. Lewis, Lewis Carrol, L. Frank Baum, and many others. I admit to not being super well-versed in all of the classic children’s fantasy titles – I’ve never read A Wrinkle in Time or A Wizard of Earthsea. But I’ve read enough to say that if you enjoyed the above authors and their stories, you will love this book. Even as an adult coming to this series for the first time, I found much to love here and knew I would have been obsessed with this series as a kid.

Growing up, we had a small, highly-stylized globe that bore the inscription “here, there be dragons.” I love that this series used this classic cartographic feature as a jumping off point – that “here, there be dragons” literally means, dragons, and also that sailing into uncharted waters brings you a world of myth and magic and fantasy – and also dragons.  I don’t want to reveal a few of the twists that occur in the story, but I will say they were all absolutely delightful and everything I could have hoped for and more.

Finally, it should be noted that the author is a supremely talented illustrator and both the cover and the artwork inside the book (there’s an illustration that heads each chapter) are the work of the author.

I am looking forward to acquiring the next volumes in the series and continuing on with the Chronicles of the Imaginarium Geographica!